CCM AS3 Pro Skates Review: Everything You Need To Know

CCM’s new Super Tacks AS3 hockey skates hit the market during the spring / summer of 2020 and have since become one of the most popular models produced by the company in decades.

These skates are designed to give players a serious edge with premium-quality features and plenty of support for the feet and ankles.

While these skates might be outside of the novice or beginner level hockey players’ price range, there is no denying that CCM created this model with elite players in mind to give them every advantage possible on the ice.

As far as we’re concerned, the CCM AS3 Hockey Skate is one of the best hockey skates on the market.

In this article, we’ll take a closer look at the many new features CCM added to the Super Tacks AS3 model skates and delve into just why they will give athletes more of an advantage than most other models out there.

Editors Note: recently, CCM dropped the all new CCM JetSpeed FT4 Pro skate. We’ve covered this skate extensively on our website and in on ice testing, as we do with all products we cover.

CCM AS3 Pro Skate Overview + Everything You Need To Know 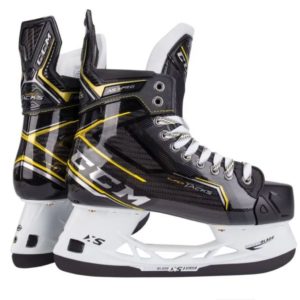 Here is every skate in the current CCM Super Tacks lineup

In addition to having an all-around sharp appearance and next-gen look, the Super Tacks AS3 model hockey skates are a huge improvement over previous models that have been produced by CCM in years past. It has elevated stiffness to provide players with better precision when turning or coming to a sudden stop on the ice, as well as better ankle pads that CCM’s older style skates.

Does that mean they’re not worth every penny? These skates are 100% worth it. We’re going to take a deep dive into the highlights of this NHL level skate, which is most likely worn by some of your favorite pros as we speak, in the AS3 skate review below.

What Makes The CCM AS3 Pro Skate Top Tier? 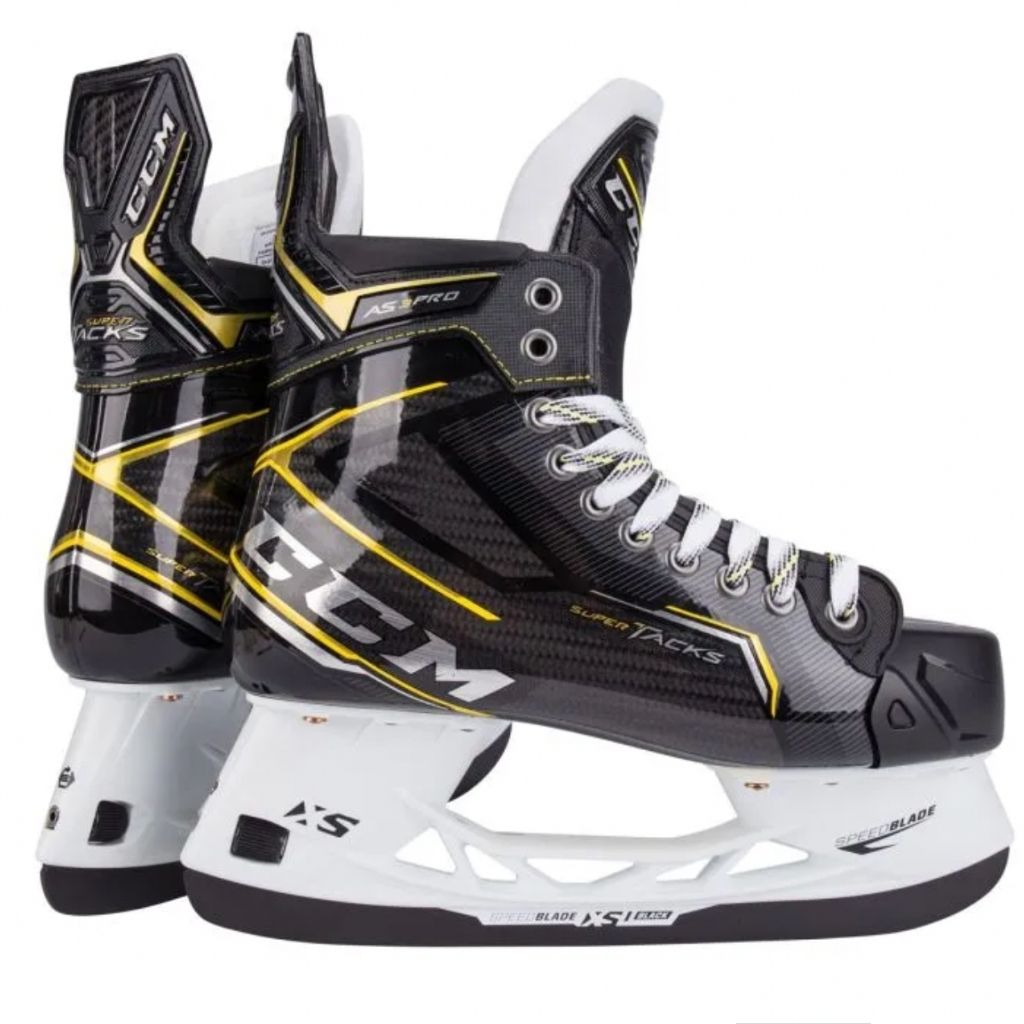 One of the most important factors that come into play regarding the Super Tacks AS3 is that they are made with a one-piece boot construction, which gives them a much better overall level of support and comfort for players of any skill level.

Elite hockey players who wear the Super Tacks AS3 describe this concept as giving them a more ergonomic, intuitive feel for the ice than they might have with other brands or models.

This one-piece boot construction also translates into giving players more control over their movement and acceleration than ever before.

One-piece boots typically are credited with players being less likely to suffer ankle or foot injuries as the added support helps to keep the body’s lower extremities in better alignment. 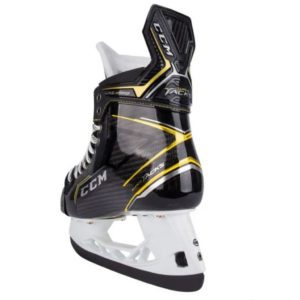 Engineers and researchers all agree that one of the most important factors in creating an elite-level skate is maximizing the amount of energy transfer between the athlete’s foot and the actual skate itself.

The Super Tacks AS3 is one of the latest models to make significant improvements in this area due to the unique one-piece boot construction.

The more traditional two-piece boots are known to allow energy to be dispersed in a more lateral form instead of allowing the athlete to drive their feet into the ice and create a better bite, allowing them to skate faster and with tighter stops or turns.

This elevated level of energy transfer allows professional and elite hockey players to enjoy better push-offs and much more precise turns than ever before, which helps to give them a significant advantage over their opponents on the ice. 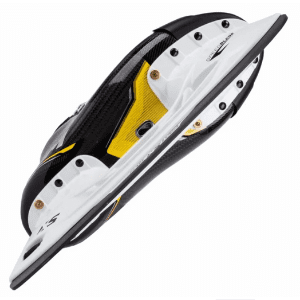 One of the main concerns with hockey players is having a pair of skates that is both comfortable and able to increase their performance—especially when it comes to the collegiate or professional level.

The Super Tacks AS3 skates are designed with extra memory foam padding to help athletes take better overall care of their feet and ankles, which can take quite a beating for those who practice or play at a high level.

The AS3 has a much thicker level of padding around the heel and ankle than previous models created by CCM. According to the company’s website, the Super Tacks AS3 offers padding that’s two-thirds thicker than older versions like the AS1.

The new model also features added padding around the forefoot area which helps to provide a much more comfortable boot that will last significantly longer than other brands or models might. 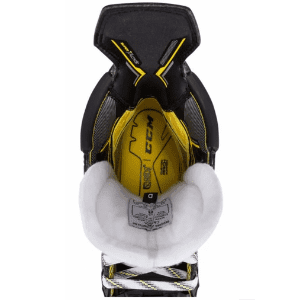 The Super Tacks AS3 are made with a stiffer carbon-fiber material that bends less and allows for much higher energy transfer from the player’s foot to the ice itself, resulting in an increase in an athlete’s speed, agility and ability to start and stop.

This increased level of stiffness is considered to be a much greater advantage to larger-sized players who commonly experience problems with their skates bending and forcing them to work harder to get the same level of acceleration they might have with the superior one-piece boot construction of the Super Tacks AS3.

Are the CCM AS3 Pro Skates worth the money?

The CCM Super Tacks AS3 Pro skates are one of the best skates available to the public. Yes, they’re worth every penny. If you’re looking to buy a skate that current NHL players wear, one that will last you the next 4+ years and perform at the highest level day in and day out, buy these skates.

In addition to the big 3 things that set

CCM also designed the Super Tacks AS3 skates with a TOTALDRI Pro+ liner that is made of high-performance, moisture-wicking material that allows players feet to stay mostly dry and comfortable while on the ice, which gives them better overall performance.

Each pair of Super Tacks AS3 come with CCM’s Orthomove footpads that provide excellent arch support and elevated comfort that can be tailor-made to meet the exact needs of each athlete.

These skates’ blades can also be easily exchanged when needed since they are made with CCM’s new Speedblade Xchange System that allows users to quickly and easily change out their old blades for new ones.

Users can also opt to change out the standard blades that come with each new pair of Super Tacks AS3 skates with any one of CCM’s new skate blades, including the Speedblade XS1 Black, which is exceptionally popular with professional hockey players.

CCM AS3 Pro Skate vs CCM AS3 Skate?

Believe it or not, this is one of the most commonly asked questions we get when it comes to hockey skates. Can I save a little bit of money and go with the lower end, “not pro” model of the product I’m looking at?

In this case, the difference between the CCM AS3 Pro and the AS3 Skate are hardly noticeable. That said, the AS3 Pro does have a few things that push it above and beyond it’s kid brother, the AS3 “Not Pro” we’ll call it. CCM, and every other hockey brand, call the Pro Knock off the “Senior” model of whatever piece of gear they’re talking about. It’s confusing, yes.

There are two major differences between the AS3 Pro skates and the 9380 skates.  The first is the price.  At the time of writing this, there is nearly a $600 price gap between the two pairs of skates.

Now the second major difference is the quality of the skate.  CCM makes a really good skate, but there’s a reason that the price is dropping.

The Tacks 9380 are made with a two-piece boot, which is going to result in less power with your strides.  The boots will also be a touch heavier in the ladder of the two skates.

The blades are made of stainless steel that isn’t oxide treated, like the AS3’s Pros are.

So as you can see, there is definitely a difference between the Tacks 9380 and the Tacks AS3 Pros.

You’ll still see many of the same features in the two, but there are some changes.

The 9380s are a solid option if you are looking for a somewhat budget skate.   You can check the latest price of them here on Pure Hockey or Hockey Monkey.

As we continue down the list to the Super Tacks 9370s you’ll find more of the same.  Price goes lower, quality decreases and just worse overall performance.

That doesn’t make these skate by any mean bad, just not as good as the elite.

Are the CCM AS3 Pro Skates good for Youth Hockey Players?

If you are youth go with the CCM AS1.

Hopefully, this article has cleared some things up about the CCM Super Tacks AS3 Pro and lower models of hockey skates.  I personally do recommend these skates for multiple reasons, but the main being that they are good at creating powerful strides.