How Long Is A Hockey Game?

Hockey is a fast-paced sport that can be exciting to watch. But how long does a hockey game actually last? How many periods are there in a game? How many minutes are in each period? And what happens if the game goes into overtime? In this blog post, we will answer all of these questions and more!

How Long is A NHL Hockey Game

How Long is A High School Hockey Game

What Happens Between Periods

How Does A Hockey Game Start

Number of Players On Ice

What is A Penalty

How Long Is A NHL Hockey Game

First, let us talk about the length of a hockey game. The National Hockey League (NHL) is a professional hockey league in North America and the most popular one in the world. An NHL game consists of three 20-minute periods with an intermission between each period that lasts 17 minutes and 30 seconds. 60 minutes of actual hockey. This means that a hockey game in the NHL typically lasts about two hours and 15 minutes to three hours all said and done.

Professional hockey games will also have commercial breaks. These typically last a couple of minutes and they allow the player to get a breath of air.

If the game is tied after the third period, it will go into overtime. Overtime in hockey is a five-minute period that is played three on three (meaning there are only three players from each team on the ice at a time). If the teams are still tied at the end of overtime, then the game goes into a shootout. A shootout is a three-round contest in which each team takes turns shooting at the goal. The team that scores more goals during the shootout wins the game.

There are other factors of the game that could also delay or shorten a hockey game. Player injuries, equipment malfunction, or even a lot of whistles can slow the game down. It will vary from game to game.

College hockey games are similar to NHL games being that they also have three periods 20 minute periods for a total of 60 minutes on the ice. The difference between an NHL game and a college game is that college hockey will end in a tie if neither team scores in the overtime period. Unless of course, it is playoffs. 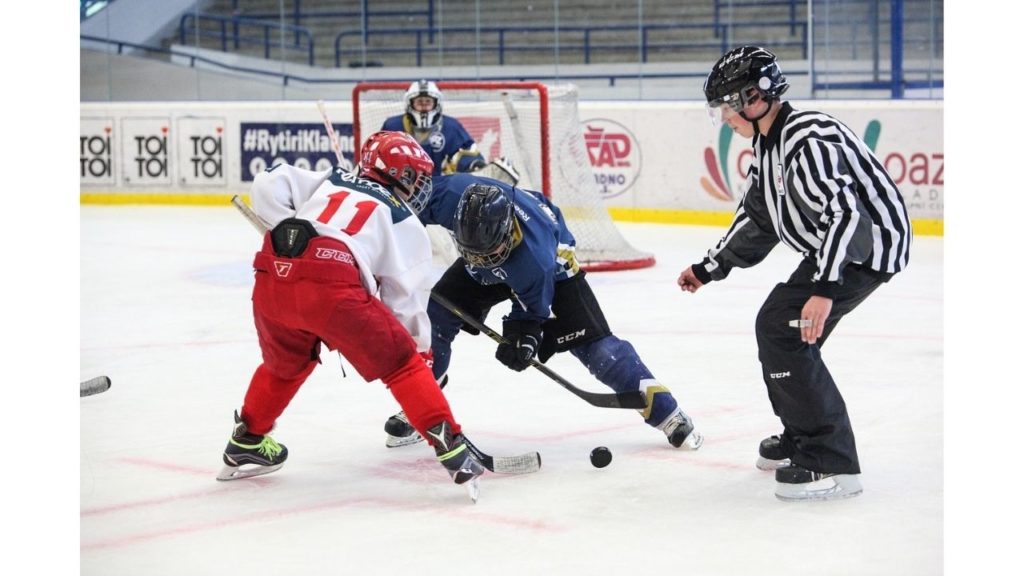 How Long Is A High School Hockey Game?

If the game is tied after regulation time, high school games will go into sudden-death overtime if there are playoffs or championships on the line. Overtime in high school hockey is a five-minute period that is played five on five (meaning there are only five skaters from each team on the ice at a time). If the teams are still tied after overtime, then the game is considered a tie.

What Happens Between Periods?

During the intermission between periods, teams switch sides of the ice. The players will also rest and hydrate during this time while coaches make adjustments to their strategy or game plan based on what happened in that particular period. They may retape their hockey sticks or adjust other equipment. Intermission breaks last twenty minutes in the NHL and around twelve to fifteen minutes at the high school level.  It is also common for fans to get food and drinks at this point as the concession stands are open.

How Does A Hockey Game Start?

Now that we know how long a hockey game lasts, let us talk about how the game starts. A hockey game begins with a faceoff. Two players from each team line up opposite of each other and try to win control of the puck. The referee drops the puck between the two players and they battle for possession.  Game on!

The players warm up before the game to get mentally and physically prepared for the game. They skate on the ice, stickhandle, shoot at the goalie, do dryland training in their dressing room, and talk about plays with their teammates.

Hand-eye coordination is an important aspect of the game of ice hockey. The players have to be able to control the puck and make quick decisions with the puck.

The warmups before the game are important for the players to be successful in the game. They need to be physically and mentally prepared for the game.

How Many Players Are on the Ice At Once

What Is A Penalty and How Long Do They Last?

Now that we have talked about how long an ice hockey game lasts, let us talk about what happens when someone gets penalized. A penalty is when a player commits an infraction of the rules and is sent to a penalty box for two minutes. If a player gets penalized, they have to sit in the penalty box until their time is served or if another player from either team scores while they are in there.  You can also check out our in-depth post about hockey penalties and what they mean if you want to learn more!

When a player from your team takes a penalty, players will say that “we’re going on the PK”.  Click the link to read about more interesting hockey slang terms!

In conclusion, we hope this blog post has answered all of your questions about how long does the average hockey game take! There are many factors that can affect the length of an ice hockey game, so if you are an NHL fan wanting to watch the game tonight, plan on a couple of hours all said and done!