Just one year after Bauer released its highly popular Bauer Re-Akt 95 hockey helmet, the design experts and engineers of the brand have created an updated model that’s aimed at offering an even better fit than its predecessor. The Bauer Re-Akt 150 brings with it a number of new features and design elements that give players a distinct fit that few other companies in the hockey industry have been able to come close to achieving.

Released in 2019, the Bauer Re-Akt 150 has become one of the most popular hockey helmet models in the industry.

Players from across many different skill levels have found Bauer’s new design to be better than most others you’ll find at the moment because the Bauer Re-Akt 150 is focused on eliminating negative space inside the helmet’s interior, as well as giving users the ability to adjust the overall fit from three different perspectives.

There are plenty of interesting new features and design characteristics that have made the Bauer Re-Akt 150 so popular since it was released. Let’s take a closer look at these features and explain how they combine to give players a customizable fit that’s truly hard to match. 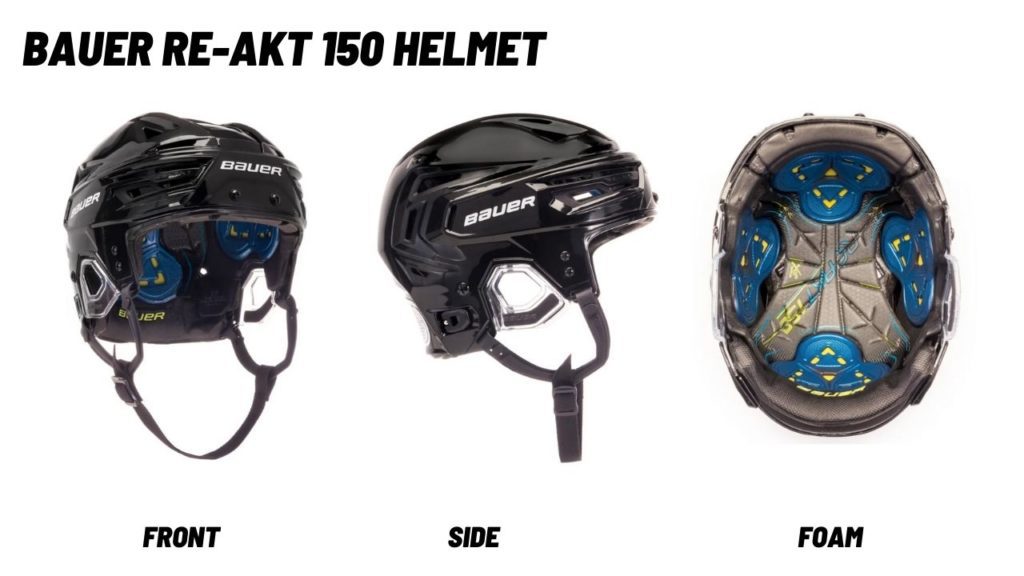 The main reason so many players have been raving about the Bauer Re-Akt 150 is the highly adaptive fit that it’s able to provide.

When compared to other standard hockey helmet models, the Bauer Re-Akt 150 feels and fits like a specially-made, custom-fit model that has an exceptionally firm grip on the player’s head.  If you wondering the difference between the the Re-Akt 150 and the Re-Akt 200, we have a review of the 200 here.

This works to eliminate any slipping or sliding while the helmet is strapped on the player’s head, which in turn creates a much more protective product than other models have been in the past. Users can adjust the helmet from three different points, which can be done quickly and easily without specialized tools.

The new interior protective foam liner and padding are also revolutionary in the sense that they are not as big and bulky as other styles from different brands, yet they are still capable of giving the player plenty of protection from impacts that can result in head injury during games or practices. 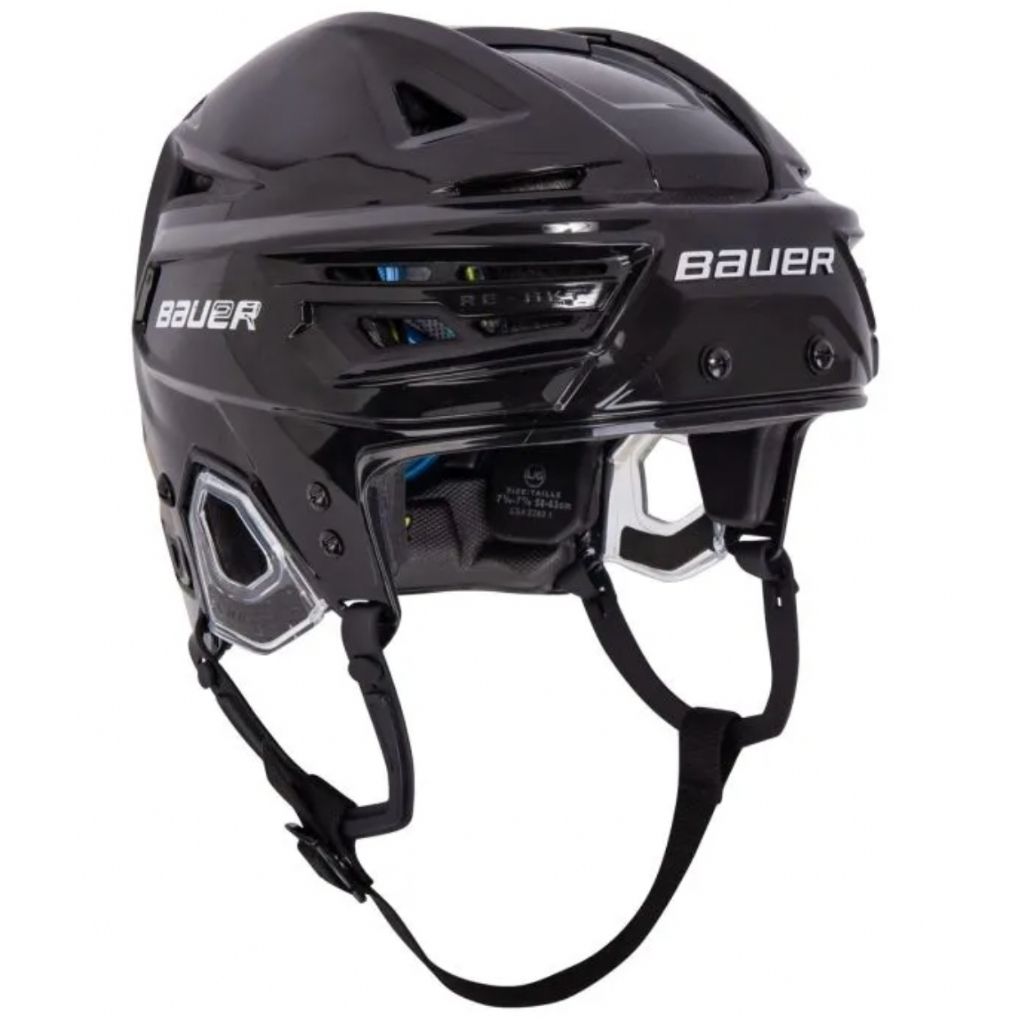 One of the most innovative parts of the Bauer Re-Akt 150 hockey helmet is the XRD foam padding that is placed in the helmet to fill in portions that are typically void of any material and therefore create more potential for head injury when it comes to sudden impacts.

This foam padding is unlike any other of its kind on the market with many players describing it as feeling like a gel-filled liner that conforms to the head’s exact shape in spots where other helmets would leave small gaps between their head and the padding. 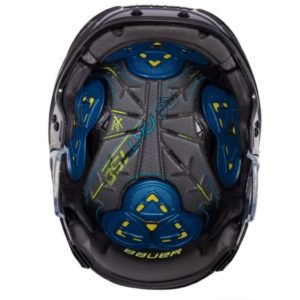 The padding is very flexible and capable of contouring along with the player’s head in order to achieve the best possible fit without any necessary adjustments.

Thus making it one of the best helmets for comfort…

This foam material has been proven to be as effective as some of the other types of thicker, more bulky foam used in other popular helmet models that are on the market today.

The foam is designed by Bauer for high-impact energy absorption, which means players are better protected with the Bauer Re-Akt 150 despite it having less volume when it comes to the thickness of the padding.

The company’s patented IX foam material are the blue portions of padding inside the helmet that are specially reinforced to enhance the helmet’s ability to guard against harsh impacts on the front, rear, and sides that commonly result in concussions or other serious head injuries on the ice. 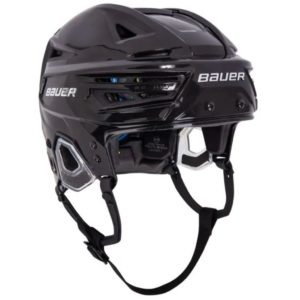 The Bauer Re-Akt 150 is made with a distinctive interior foam liner system that’s only included in helmets that are part of the brand’s Re-Akt lineup.

These interior foam padding liners might not look like much on the surface, but they are layered in such a way as to provide ample protection from sudden impacts, as well as an incredibly comfortable fit that won’t move around—no matter how intense the action on the ice might get.

The liner system is designed to fully encompass the player’s head in a way that is unlike any other model you’ll find on the market today. Players who first try on the Bauer Re-Akt 150 describe it as feeling like it has been specially made to fit the slightest changes in their head shape.

Instead of a foam liner that sits on top of the head, the Bauer Re-Akt 150’s padding conforms to the shape of every players’ head and offers an unwavering fit that won’t move around during fast and intense action on the ice. 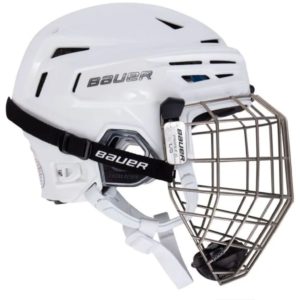 As hockey helmets change and adapt to the growing needs of the players in today’s game, many brands have started to create highly unique designs that are aimed at giving them a better overall fit than helmets of the past.

It’s hard to deny that the Bauer Re-Akt 150 accomplishes this in a way that no other hockey helmet has done up until this point.

Thanks to the Bauer Re-Akt 150’s FreeForm Fit System, players can adjust the interior foam padding’s grip on their head by adjusting three different points on the helmet.

Now, instead of only having one point of adjustment, players can manipulate the fit on their head in relation to the width, length, and overall circumference.

Once these three points are fully adjusted to the player’s exact head shape, many users describe the Bauer Re-Akt 150 as offering a fit that feels like it’s been specially-made for their own head shape and size.

Since the helmet has the ability to firmly grip the player’s head without leaving empty space inside, the Bauer Re-Akt 150 delivers a much more protective experience than most other brands on the market today.

Bauer has recently released it’s latest and greatest helmet, the Vapor Hyperlite.  If you want to check it out in depth we have click here to read more… 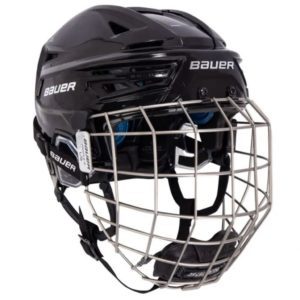 The Bauer Re-Akt 150 is priced at a level that most hockey players can afford and this is an ideal model for users who might expect to grow a bit over the course of a few seasons and require a helmet that is capable of adjusting with their head shape. If you’re searching for the most comfortable hockey helmet on the market, the Bauer Re-Akt 150 is certainly worth a closer look.