Bauer is a name that’s been at the top of the hockey industry in recent years for good reason. Players from a range of skill levels recognize the value of the brand and the UltraSonic model is one of the most popular sets of skates on the market right now.

The brand made a major redesign of one of their most popular models in releasing the UltraSonic and there are plenty of reasons for players to take a closer look at these skates this year.

The overall design of the new Bauer UltraSonic skates is based on optimizing skating power.  The engineers focused their efforts on creating two distinct models that are able to deliver specific advantages based on a player’s style of play.

There are plenty of new features and advantages that should appeal to hockey players of all skill levels. In this article, we’ll cover those features and describe what each type of Bauer Supreme UltraSonic skates offers players and how it can help you improve your own game. 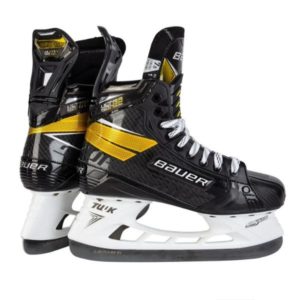 Bauer has gone to great lengths to design their new UltraSonic skates in a way that plays into the strengths of each type of hockey player, from those who are better at straight line speed to others who prefer to rely more on agility.

Bauer created two distinct types of skates in comparison with their UltraSonic Series and Vapor family.  The Vapor skates are designed for lateral quickness and maneuverability while the Supreme, is designed to give players more power in their skating style than ever before.

These two types of skates have been in the UltraSonic lineup, but the third style, Nexus, has been absorbed into these two skate designs in a way that is aimed at giving players a better overall experience on the ice. 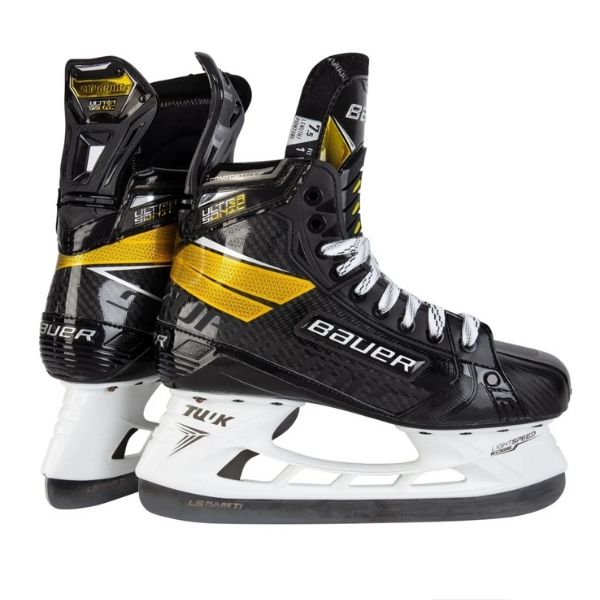 Both the Vapor and Supreme are offered in three basic ‘fits’ instead of the classic width distinction of D or EE. Bauer’s UltraSonic line of skates is available in a simple new line that is labeled Fit 1, Fit 2, or Fit 3, based on the width of one’s foot.

Fans of the UltraSonic Nexus shouldn’t worry as the exact fit and characteristics of that particular style are still able to be achieved in just the right Fit level, as well as whether a player opts for selecting the Vapor or Supreme.

Fit 1 is made to fit players who have a more narrow foot profile and features a low volume design that is optimized for quickness.

Fit 2 is crafted to fit the average hockey player’s foot as it is a happy medium between the narrow Fit 1 and the much wider Fit 3. This one is also of medium-level volume.

Fit 3 is perhaps more closely connected to the older Nexus model as it is made to fit players who have a wide foot and might require a bit of extra support around the edges. 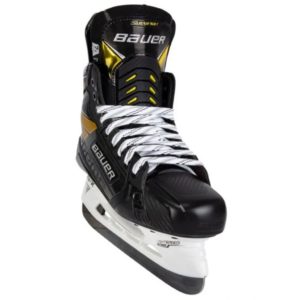 The engineers at Bauer have worked to develop a new and improved material that offers the optimal level of stiffness and support that professional hockey players look for when it comes to a quality pair of skates.

This Curv material is incredibly lightweight and, yet, is still capable of providing plenty of rigidity to allow skaters to make tight turns, stop on a dime, or accelerate to high speeds with proper form and technique.

As any skilled hockey player already knows, having a pair of skates that enhances your own ability to be as mobile and agile as possible can have serious implications to your game.

It might be hard for some novice or even beginner hockey players to justify spending upwards of $1,000 on one pair of skates, but those who have many years of experience in either playing or coaching are able to quickly recognize the benefits that products like the Bauer UltraSonic hockey skates provide to users. 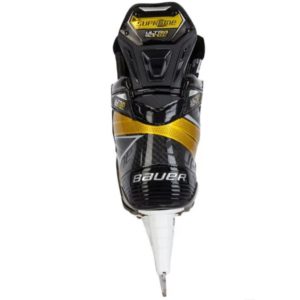 The engineers at Bauer were tasked with coming up with a new design that had certain components which helped players make the most out of their own physical efforts.

The Bauer UltraSonic skates are made to give players an increased range of motion through having a better fit for a variety of different foot shapes and sizes. The lower profile design helps players get a better degree of power in each stride, which makes a huge difference in improving your closing speed when you’re in a race to reach the puck against your opponent. 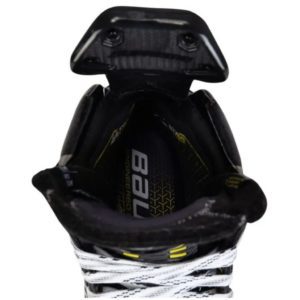 These skates are also equipped with the Reflex Pro tongue, which is made in a new symmetrical design that is aimed at giving players a better range of motion and stride length.

This new addition is also padded and has a tough layer of extra armor-like padding that helps to protect a player’s feet at all times on the ice. 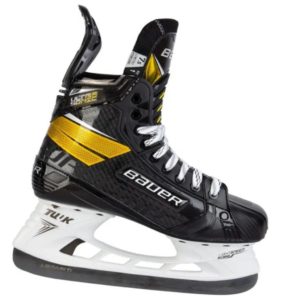 Part of what makes the UltraSonic lineup so much better than previous models is the new addition of UltraSonic features the Tuuk LS Pulse TI.

This new and improved blade is capable of giving you a better grip on the ice through greater edge retention.

This translates into the ability to skate faster and have much more acceleration, which can be a massive advantage when you’re in a race to make the shot or set up a formation.

There is no denying that the Bauer UltraSonic hockey skate lineup is one of the best that the company has ever produced.

Players report having much more range of motion in each stride while wearing either the Vapor or Supreme model of UltraSonic skates, as well as much more acceleration.

Experienced hockey players who have worn the new UltraSonic skates have also noted that they fit much better than most other types of hockey skates that are currently available.

Bauer has achieved a much higher level of quality in their newest design of the UltraSonic and skilled hockey players who are seriously looking for a solid pair of skates should certainly give the UltraSonic lineup a shot.

If you aren’t sure that these skates are worth the investment, we’d recommend checking out the Bauer Supreme 3S skates… They’re a similar skate but geared towards players on a budget.